WACO IS JADE HELM 15 AND ANOTHER SANDY HOAX

5/19/2015  At around 6:30 p.m. a regular search of the internet was made and a link was located to an article that claimed that the Waco was a psy-op.  Attempts to locate this article turned up a removal of the link.  Already, the totalitarian government NSA spies have removed information that should be available to all readers on the worldwide net.  Assured that the suspicions of this reader are not the only suspicions, the removal of the article and the suspicious lack of articles about this supposed "gruesome" crime, a lack of public response to the event, a lack of pictures of injured or dead, and a sense that the reporting about the event seemed "staged" - like the Sandy Hoax reporting - reaffirms suspicions that Americans now face yet another false flag event that has made its way south to the "hostile" state of Texas.

I rode through Waco around 6:00 p.m. that same Sunday afternoon and saw no heavy sight-seeing or increase in traffic for a Sunday afternoon. A regular trip, any changes in these patterns are easily spotted.  Upon tuning in to and hearing the radio reports, this reader noted the falseness of the presentation - with reporters even making a remark about how the usually even-tempered Waco sheriff seemed to have a crack in his outward veneer.  Since when does anyone give a rat's ass about a reporter's perception about anyone?  There was a lack of emotional response and outrage by the public that should've been a result of an actual attack.  But, no, the response was flat.  Americans have become so accustomed to a lying and stage-acting government - or black ops behind the scenes - that we no longer have a reason to believe anything we see in the media.  We've figured out the liars and they know it.  Continuing to move equipment and personnel around the country, staging the first controlled take-over of this country, Americans must awaken to the fact that these false flag events are simply staging areas and military exercises.

This reader contends that the event was staged and executed by the Totalitarian government.  Waco is about sixty miles from one of the largest bases in the U. S. - in Killeen, Texas, and is a base from which the totalitarian regime carries out its most extreme and murderous acts of violence against "American" citizens.  Any casualties of innocents will be Texans - whom Oboma particularly despises.

The reason for the location of these deadly psy-ops in Waco, Texas, are due to its location.  Within an hour, government psy-op military and C.I.A. operatives are able to travel from Killeen to Waco without taking a bathroom break and drawing attention to themselves and to be able to pull off a false flag event that the government hopes to justify to the American public - the implementation of Jade Helm 15's movement of military personnel and equipment into civilian areas.

Print screen of article located regarding Waco false flag of May 17, 2015: 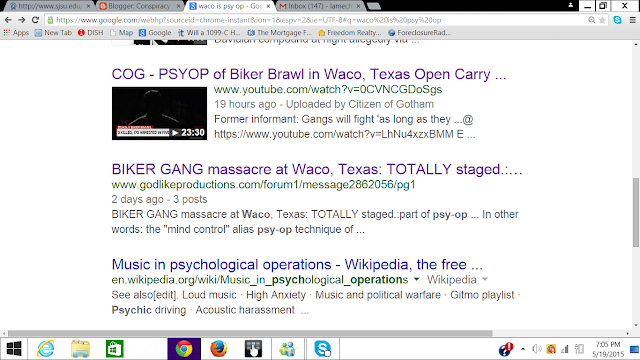 Following the link, it is found that the entry/article located at godlike productions has been removed and had only three replies, apparently. 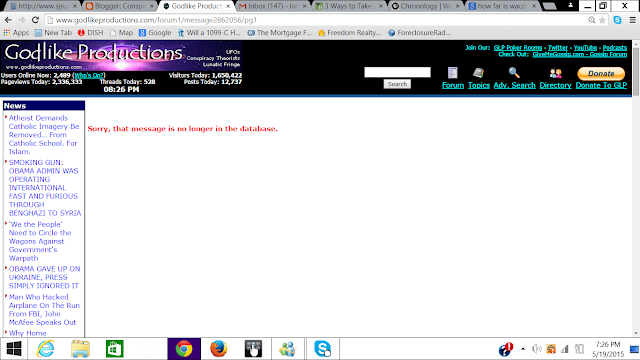 Anyone familiar with motorcycle gangs notice a sunburned appearance, especially around the ears that are exposed routinely to the elements. Pictures of gang members show clean-cut folks who have apparent little regular sun exposure.  Also, notice pictures of flabby, white arms that do not denote typical characteristics of gang members.  They exhibit few to no tattoos - a dead give-away of CIA operatives acting out a poorly-executed and false flag event.

Check out the following photo.  The SWAT team member holding the gun is bearded and dressed in T-shirt and jeans - and they are all fucking smiling: 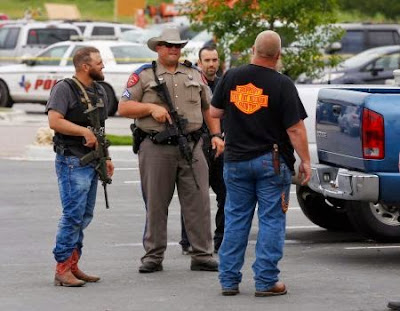 Now check out the following photo.  Note the identical appearance of supposed gang members in identical clothing and facial hair: 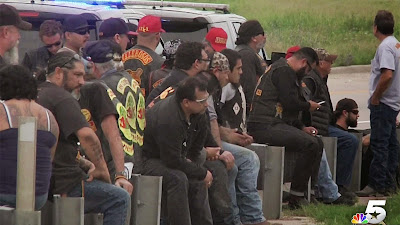 Are we politically-correct-thinking Americans to presume that brown skin makes these folks "gang" members?  Check out the guy fourth from the right - with identical facial hair and hairstyle as the SWAT member pictured above.  Note that he is on his cell phone.  Last time I checked, a "suspect" being held for questioning surely couldn't be texting or using a cell phone,  Doesn't it make you wonder how many of these folks were bused in from other locations...having responded to ads run by the government advertising for "event actors"?  Or just military folks on their usual false flag missions.

Expect tanks and other military equipment to find their way to the streets of an otherwise poor and unemployed city - typical of most American cities these days.

THERE ARE FEW TO NO PICTURES OF THE SUPPOSED INJURED, BLOODY, OR DEAD

Doesn't this remind you of another false flag event in which no one was killed?  Sandy Hoax anyone?